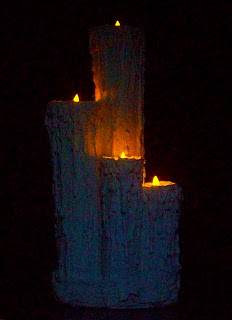 Building and repair of the Haunt has commenced!


I thought I'd share one of the smaller, yet larger, projects to take on this year. That project was the faux candles that came with the haunt from Skull and Bone.


I say larger by virtue of sheer numbers.


The originals from Rob were cut, grouped in some cases, and then slather-coated with "Fix-All" which is a powder that, when mixed with water, forms a sort of plaster. It bulked out the straight PVC pipe and made them look "softer". Some were also filled with Great Stuff to build up the inside and form a "shelf" for the tea lights to sit on.


Years of use and weathering had caused many of them to become brittle and unstable. During the transporting of the haunt a good many of them essentially shattered and I was left with bare pipes and piles of plaster chips. Some came apart just picking them up as the plaster makes them heavy and some of the groups weren't wired or otherwise bound together first. Many, however, did escape harm and were reusuable with the plaster mostly intact. 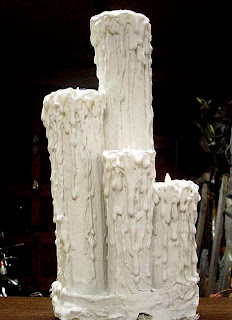 The originals were "smoother", but I wanted to add detail by giving them more pronounced drips. I may have gone a little overboard, but I like them slightly exaggerated. Plus, they are all much more stable and durable now and should last for many years.


Work on the haunt continues apace.

Posted by House Bloodthorn at 11:22 AM